The order Psittaciformes is comprised of the parrots and their allies. They are found in most warm and tropical regions. The greatest diversity of parrots is found in South America and Australasia. Characteristic features of parrots include a strong curved bill, an upright stance, and strong legs. Like woodpeckers, they have 2 toes pointing forward (digits 2, 3) and 2 toes pointing backward (digits 1, 4). Most parrots are predominantly green, with other bright colors. They generally exhibit little or no sexual dimorphism. The most important components of most parrots' diets are seeds, nuts, fruit, buds and other plant material. Almost all parrots nest in tree holes. Parrots are some of the most intelligent birds, and the ability of some parrot species to imitate human voices enhances their popularity as pets. 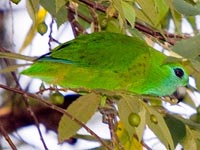 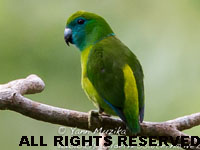 Genus Loriculus
The Hanging Parrots are unique in their ability to sleep upside-down. The are usually mainly green and have a red rump. They are found in tropical southeast Asai, Indonesia, Malaysia, New Guinea. See also Psitt_Parrot_AU.

Genus Prioniturus
The Racquet-tail parrots are found in the Philippines and Indonesia.

Genus Psittacula
The Afro-Asian Ringnecked parakeets are found from Africa to South-East Asia. This is the only genus of Parrot which has majority of its species in Asia.