Thrushes are plump, soft-plumaged, small to medium-sized birds, inhabiting wooded areas, and often feed on the ground or eat small fruit. Most species are gray or brown in color, often with speckled underparts. Even if the adults do not have these speckles, the juveniles often will. They are insectivorous, but most species also eat worms, snails, and fruit. Thrushes build cup-shaped nests, sometimes lining them with mud. They lay two to five speckled eggs, sometimes laying two or more clutches per year. Both parents help in raising the young. The songs of some species are considered to be among the most beautiful in the avian world.


The miscellaneous thrushes are closely related to the "True Thrushes". 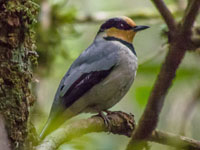 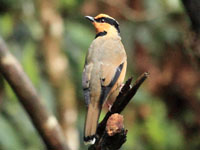