Owls are found on all continents except Antarctica. Owls are divided into two families: the typical owls, Strigidae; and the barn-owls, Tytonidae. They range in size from 13-70 cm. Owls do not construct nests, but rather look for a sheltered nesting site or an abandoned nest in trees, underground burrows, or in buildings, barns and caves.

Owls are solitary and nocturnal. They hunt mostly small mammals, insects, and other birds though a few species specialize in hunting fish. Most hunt for prey only in the darkness. Much of the owls' hunting strategy depends on stealth and surprise. They are very quiet in flight plus they have dull colors. Owls have large forward-facing eyes and ear-holes, a hawk-like beak, a flat face, and usually a conspicuous circle of feathers around each eye. The facial disc helps to funnel the sound of prey to their ears. Although owls have binocular vision, their large eyes are fixed in their sockets, as with other birds, and they must turn their entire head to change views. Owls can rotate their heads and necks as much as 270 degrees in either direction. The female is usually larger than the male.


Genus Bubo
The Eagle-Owls are large owls with ear tufts of varying size. 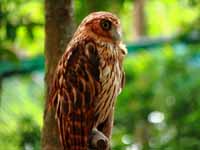 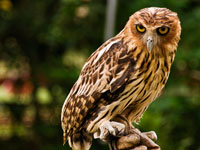