This family has only genus Bombycilla, the waxwings. All three species have mainly brown plumage, a black line through the eye and black under the chin, a square-ended tail with a red or yellow tip, and a pointed crest. When available they eat fruit. Waxwings will also eat sap, buds, flowers, and insects.

The Palmchat is the only species in the genus Dulus and the family Dulidae. It is thought to be related to the waxwings, family Bombycillidae, and is sometimes classified with that group. The name reflects its strong association with palms for feeding, roosting and nesting. 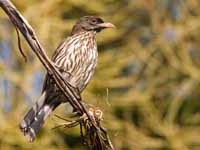 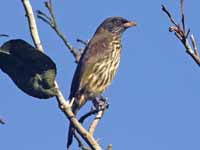 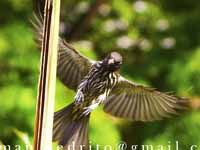 There is only one genus in this family.. 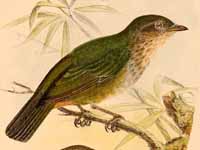 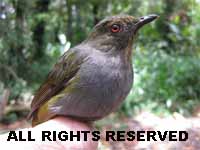 The silky-flycatchers family contains only four species in three genera. They were formerly lumped with waxwings in the family Bombycillidae. The family is named for their silky plumage and their aerial flycatching techniques. . Almost all species have small crests. They range in size from 1825 cm in length and are mostly slender birds. Juveniles birds of both sexes are colored like the female. They eat fruit or insects. They occur mainly in Central America.

Phainopepla   Phainopepla nitens Found: southwest North America and Central America
The Phainopepla has a crest, long tail, short and slender bill. The male is glossy black; the female is plain gray. Both sexes have red eyes, but these are more noticeable in the female than the male.
Similar to: Cedar Waxwing, Northern Cardinal, Northern Mockingbird. Phainopepla does not closely resemble any of these species except for its general shape.
Image by:  1)   Alan Vernon  2) Searchnet Media   3) Dick Daniels - Arizona  4) Ted Grussing - Arizona  5) Elaine R Wilson - Near Superior, Arizona  6) New Jersy Birds 7) Chris Queen - Arizona
1, 2) Female 3, 4, 5, 6) Male 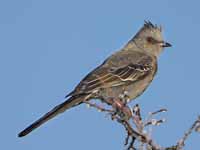 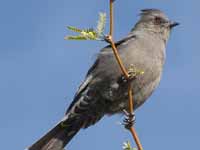 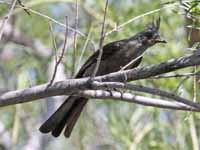 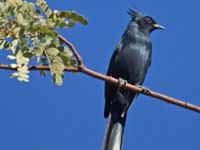