Loons are famous for their hauntingly eerie call. The sexes have similar plumage, but the males are larger than the females. They are similar to cormorants and penguins. All of these birds have webbed feet, float low in the water, and chase fish by swimming underwater. The fact that a loon often abruptly dives for fish resulted in the birds being referred to as divers in the Old World. To aid their swimming and diving, their legs are located far back on their body. This results in their having great difficulty walking and this clumsy behavior resulted in the birds being termed loons in the New World. Grebes also have their legs located far back on their body and they too walk ungainly. To aid in their digestion of food, loons ingest pebbles from lake bottoms to help grind their food. In the past, lead fishing sinkers were also ingested along with the pebbles and that caused a decline in loon population. Fortunately, lead sinkers are now banned.

The bones of loons are denser than all other other flying birds. This extra weight lets them swim low in the water and prevents them from being too buoyant when swimming underwater. However, it does mean that their takeoffs for flying are problematic. Most species need to take off from water and must head into the wind while taking off. There have been instances of lakes freezing suddenly and loons dying because they could no longer take off. 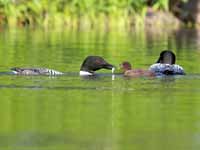