Galliformes are heavy-bodied ground-feeding domestic or game birds. Most are plump-bodied with thick necks and moderately long legs, and have rounded and rather short wings. They do not fly well if at all, but walk and run instead for transportation. These birds vary greatly in size from 12-120 cm. Many adult males have one to several sharp horny spurs on the back of each leg, which they use for fighting. They can be found worldwide and in a variety of habitats, including forests, deserts, and meadows. Male courtship behavior includes elaborate visual displays of plumage. Gallinaceous birds feed on a variety of plant and animal material, which may include fruits, seeds, leaves, shoots, flowers, tubers, roots, insects, snails, worms, lizards, snakes, small rodents, and eggs.

The megapodes, also known as incubator birds or mound-builders, are stocky, medium-large chicken-like birds with small heads and large feet in the family Megapodiidae. Their name literally means "large foot" and is a reference to the heavy legs and feet typical of these terrestrial birds. Megapodes are superprecocial, hatching from their eggs in the most mature condition of any birds. They hatch with open eyes, bodily coordination and strength, full wing feathers and downy body feathers, and are able to run, pursue prey, and, in some species, fly on the same day they hatch. 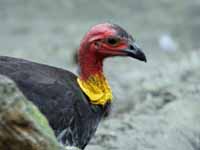 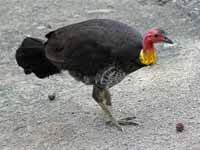 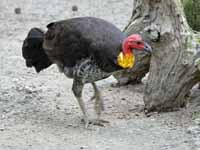 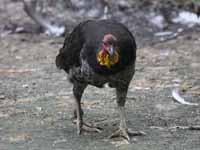 Malleefowl   Leipoa ocellata   Found: Australia
The Malleefowl's eggs are placed in a male-made mound that contains oraganic material. The decaying material produces heat which keeps the eggs warm. The chicks hatch, dig upward through the mound, and take total care of themselves.
Image by: 1) butupa  2) Dave_Curtis 3) Donald Hobern - Victoria  4) kr.afol 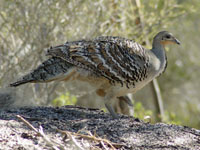 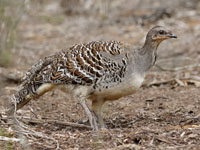 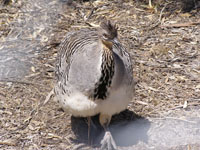 Maleo   Macrocephalon maleo   Found; Sulawesi of Indonesia
The Maleo has mainly black plumage; bare yellow facial skin; dark casque on head; black upper-breast' rest of underparts are white. The Maleos eggs are placed in a hole in the sand where they can incubate via solar energy. The decaying material produces heat which keeps the eggs warm. The chicks hatch, dig upward through the mound, and take total care of themselves.
Image by: 1) Ariefrahman 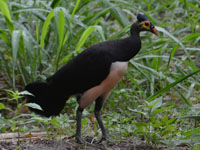 Scrubfowl do not incubate their eggs with their body heat in the orthodox way, but bury them. They are best known for building a massive mound of decaying vegetation, which the male attends, adding or removing litter to regulate the internal heat while the eggs hatch. 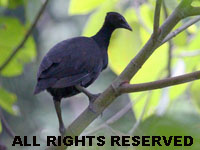 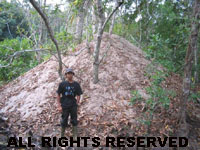