Buttonquails resemble the quails of family Phasianidae, but are unrelaed. They are small, drab, running birds, which avoid flying. The female is the more brightly coloured of the sexes, and initiates courtship. Unusually, the buttonquails are polyandrous, with the females circulating among several males and expelling rival females from her territory. Both sexes cooperate in building a nest in the earth, but only the male incubates the eggs and tends the young. 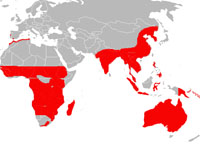 The Black-breasted Buttonuail has marbled plumaged - combination of black, brown, rufous, and white. Female is larger than male and has blacker face.
Image by: 1, 2) Tom Tarrant - Queensland

The Luzon Buttonquail is also known as the Worcester's Buttonquail. Only a few species have been photographed. Although this bird seems very scarce it remains so well hidden in its natural habitat that it may be more numerous than is thought.
Image by: 1) Arnel_Telesforo - Luzon 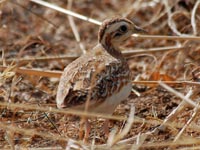