The Icterids are a group of small to medium-sized, often colorful birds, restricted to the New World. Most species have black as a predominant plumage color, often enlivened by yellow, orange or red. The majority of icterid species live in the tropics, although there are a number of temperate forms. They inhabit a range of habitats, including scrub, swamp, forest, and savannah. Temperate species are migratory. Icterids are variable in size, and often display considerable sexual dimorphism. Their size varies 15-52 cm. One unusual adaptation shared is they can open their bills strongly rather than passively, allowing them to force open gaps to obtain otherwise hidden food. Some use their gaping motion to open the skins of fruit to obtain the soft insides, and have long bills adapted to the process. Others such as cowbirds have shorter stubbier bills for crushing seeds. Orioles will drink nectar. The nesting habits of these birds are similarly variable. [abstracted from Wikipedia]

"True" Cowbirds belong to the genus Molothrus. They feed on mainly insects, and some species frequent cattle to feed off the insects that are stirred up by their hooves. Cowbirds leave their eggs in the nest of non cowbird species. This is problematic for the host species as the cowbird chicks tend to grow faster than their "siblings" and thus can get more than their share of food. On the otherhand, if the host parent removes a cowbird egg from its nest, the cowbird mother might destroy the other eggs!. 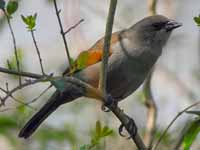