The Struthioniformes, also called Ratities, are a diverse group of flightless birds. They include the Cassowar and Emu of Australia, the Kiwi of New Zealand, the Ostrich of Africa, and the Rhea of South America. Unlike other flightless birds, the ratites have no keel on their sternum. Without this to anchor their wing muscles, they could not fly even if they were to develop suitable wings. Their legs are strong and don't have air chanbers, except for femurs.  They have no crop. Most ratites share a communal nest.

Some taxonomical systems consider the various families of ratites to be orders.

Their closest living relatives are the tinamous of South America.

This family has only 1 genus, the kiwis. They are endemic to New Zealand, about the size of a chicken, are nocturnal, and have the largest egg relative to body size.

This family only has one living genus, the cassowaries. They are shy birds of the deep forest. Females are bigger and more brightly colored. They have 3 toes and the middle has spike-like nail which is a dangerous weapon. They have a bony casque (hence tthe name) on top of the head.


Genus Casuarius
The cassowaries are flightless birds. They have horn-like but soft and spongy crests called casques on their heads, up to 18 cm (7 in). These consist of "a keratinous skin over a core of firm, cellular foam-like material". They are shy birds of the deep forest, thus seldom seen. Cassowaries can run up to 50 km/h (31 mph) through the dense forest. They can jump up to 1.5 metres (4.9 ft) and they are good swimmers, crossing wide rivers and swimming in the sea as well.

This family only has one living species, the Emu.

Emu Dromaius novaehollandiae   Found: Australia
The Emu has soft brown plumage; 3 toes; height of up to 6 1/2 feet ( 2 meters). Their legs are strong and good for long distance running. Their 3 claws are good for defense. They are polygamous. The male does most of the incubation.
Image by:   1, 4) Dick Daniels - Pine Grove Bird Sanctuary, Virginia  2, 3, 5) Dick - Australia  6) Dick - San Francisco Zoo  7) Nik Borrow 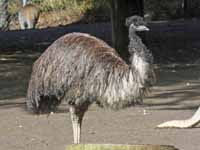 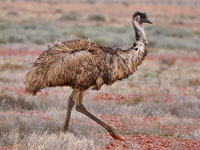 This family only has one living genus, Rhea.


Genus Rhea
The Rhea have grayish-brown plumage; 3 toes; long neck and legs. They have large wings for a flightless birds and often spread them while running.` Rheas are polygamous. The male may mate with up to 12 females. They all lay their eggs in a communal nest which the male incubates.

This family only has one living species, the Ostrich.

Ostrich,_Commonh  Struthio camelus   Found: Africa
The male Common Ostrich has mostly black plumage with white primary feathers and a white tail. Females and juveniles are grayish-brow and white. It is the tallest of any bird and can occasionally reach 9 feet. It has the fastest land speed of any bird and can reach 40 mph. The ostrich is the only bird that secretes urine separately from feces.
Image by: 1, 3,6, 9) Dick Daniels - South Africa   2, 7) Sandy Cole - South Africa  4, 8) Dick - Tanzania   5, 10) Dick - Kenya  11) Video by Avibirds.   More vidoes
1) Chick   2, 3, 4, 5) female   6) juvenile male  7 -9) male 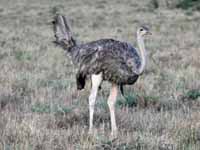 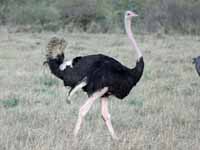 Ostrich,_Somali  Struthio molybdophanes   Found: Ethiopia, Kenya, Sudan
The skin of the neck and thighs of Somali Ostrich is gray-blue, rather pinkish of the Common Ostrich. It becomes bright blue on male during mating season. Male has white tail feathers.
Image by: 1) ninara  2) Christiaan_Kooyman  3) Steve_Garvie - Kenya